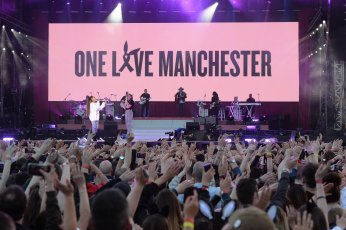 FEAR ONLY EXISTS IF YOU LET IT.

Ask the man who casually fled the London Bridge terror attack with pint in hand. Ask the Borough Market restaurant patron who returned the next day to pay his bill and tip the staff, and who promised to eat and drink out in London even more often now. Ask the thousands of concertgoers who sang and danced with security guards in Manchester, just two weeks after 22 people, many children, lost their lives in a bomb blast after an Ariana Grande show.

The recent spate of terror incidents reminded me of my own response to fear – how I used to let it beat me. And how I refuse to do so again.

Here’s the short version: As many people know, in 1993 I had a benign tumor near my brain. It was removed – that was the good news. But the surgery also caused me to lose my hearing in my right ear while leaving me with a constant ringing noise, which ranges from average volume to oh-good-lord-that’s-freakin’-loud.

Then came the real fun part – certain vibrations or loud noises would cause severe headaches and sometimes seizures. It got so bad that my doctor told me I could never again go to a concert or a sporting event. He even said I should avoid going to movies or any loud public places. The next seizure could very well end me and I wouldn’t have any warning.

In other words, the safe solution was to sit quietly and listen to that ringing in my head for the rest of my days.

That obviously wasn’t a viable option; nevertheless I did my best to comply. I stopped going to concerts, I cut back on going to the movie theater. I made excuses for not attending work events or conferences (though that was kind of a blessing in disguise.)

But a few years ago, I made a decision. I decided not to be scared.

I decided I really liked live music, so I started going to concerts again. I decided to see more movies again. I even began playing guitar in a band again, turning up the volume in an auditory middle finger to my damaged nerves and that damn ringing.

Yes, a concert could kill me. A movie could too. But so could a car during my next bike ride on PCH. So could a sandwich that I swallow the wrong way. I spent a week watching nothing but HGTV and Fox News when my mother-in-law came to visit, and I’m still shocked that that didn’t kill me.

I decided that if I’m going to die, I might as well live first.

I now love a bad day at work. I love a deep paper cut or getting stuck in the rain. I love a good cry during the sad parts and laughing during the funny ones.

I love it all, the pleasure and the pain. Because if I can still feel, then I know I’m still alive.

Fear only exists if you let it. So don’t let it.

This entry was posted in Current Affairs, Popular Culture, Uncategorized. Bookmark the permalink.

1 Response to Making Fear a Non-Factor