The Day the Scoop Died 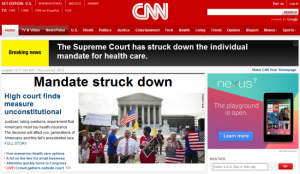 LONG, LONG TIME AGO, I can still remember how the L.A. Times used to make me cry.

Hardly a week would go by it seemed without them scooping me on some local story. I scooped them once in a while, too, but our battles were more like the Celtics and Lakers in the ‘60s and ‘70s – always in the finals, but like those Laker teams, I rarely finished on top.

We lived by the scoop but for all the wrong reasons. It was about ego, not desire to inform a wanting public. These were the pre-Internet days after all, when a 24-hour news cycle still existed. If you missed a story you missed it by a day, not by a few minutes.

Back then news organizations got “credit” and kudos for being first, and if an error occurred along the way, it would be corrected the next day on the bottom of page 6 in 8-point type, next to the shampoo ad.

Technology has changed this, of course. We now live a world where the ability to be first, even if by mere minutes or seconds, is valued more by the media that being right.

Unfortunately, this is just another example of the media clinging to the past. Today’s technology demands that we be right, because if you’re not, the damage is not buried in a correction a day or two later, but amplified in a public firestorm of embarrassment that can undo a career in the time it takes to send a tweet. Accuracy is more valuable than urgency.

The latest example, of course, is Fox News and CNN’s rush to judgment of the Supreme Court’s ruling on healthcare. Both organizations reacted to the initial Court statement by saying the law was struck down, when in fact the core provisions had been upheld. CNN corrected the error (as did Fox), but not before a screen shot of the erroneous report spread throughout the social Web.

An NBC PR person wasted no time rubbing it in, saying via Twitter: “Important to underscore something I said at @NBCNews social media workshop last week: We’d rather be right than first.”

Rem Rieder, an editor with the American Journalism Review, gave a less snarky but no less accurate assessment:

“Now there’s no doubt the scoop is a time-honored tradition in journalism. Breaking a big story is a big deal. And that competition to unearth powerful and important stories can be a very positive force.
“But worrying about being first on reporting something that is handed to you and everyone else? By 24 seconds? I think I speak for everyone when I say, it’s really not important.”

Reider is right – it’s not important. The truth is that years from now, the public won’t remember or care who was first, but they will never forget who was wrong.

Reacting is not reporting, and unfortunately there are too many “reactors” today and not enough reporters. It’s time to go back to reporting the news – the scoop is dead, let it stay that way.

This entry was posted in journalism. Bookmark the permalink.