Death of the Keyboard, Apple’s Siri and the Semantic Web

“The Semantic Web is not a separate Web but an extension of the current one, in which information is given well-defined meaning, better enabling computers and people to work in cooperation.” — Tim Berners-Lee 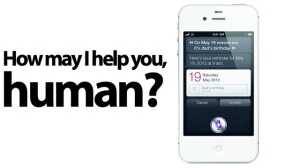 Back when War Games came out in 1983 – ten years before NCSA Mosaic, 15 years before Google – I wanted to talk to machines, not just through machines. I felt for Scotty in Star Trek IV when he picked up a computer mouse and tried to give it voice commands, only to give up in disgust. “The keyboard, how quaint,” he said.

But Siri goes much further. While still very early in its evolution and application, Siri is collecting a monster database of human behavior. Siri goes beyond “need” to “intent” – not what somebody wants, but why.

Call it technographic, call it behavioral or call it semantic – whatever the term, Apple, not Google or Microsoft, may be ushering in the era of Web 3.0 and language-based search (and with it, capturing the ad dollars that will surely follow.)

“The Semantic Web is not a separate Web but an extension of the current one, in which information is given well-defined meaning, better enabling computers and people to work in cooperation.” This is the promise of Siri — or at least it seems so at this early stage.

Once Siri moves to other iPhones (it won’t stay just on the iPhone 4s for long, there are no hardware restrictions that prevent it from being added to older iPhones) and then to iPads and Macs, we will start to see whether Siri is just a fun diversion or, rather, a founding mother of Berners-Lee’s semantic web.

The promise of technology may be closer to reality than we think.