Why Mars Matters: Elon Musk and Finding Your One Great Thing 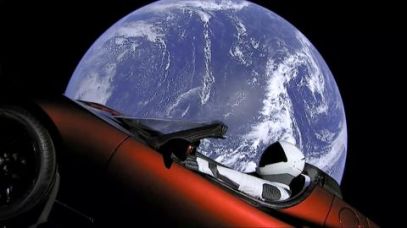 NOT SURE WHETHER YOU NOTICED, but while you were struggling to find a new word for “innovation” and finishing that PowerPoint slide explaining Facebook’s algorithm changes for the umpteenth time, a dude from California shot a car into space.

Granted, that “dude” was Elon Musk, and the car he sent into orbit was a Telsa hitching a ride on his own rocket. Not something most humans can do. But what we forget is that at one point Elon Musk really was just “a dude from California” who had as much ability to create the first space car as you did.

The only difference between you and Elon Musk (okay, besides the billions of dollars) is that Musk found and then never lost sight of his One Great Thing. Not the “next big thing,” which has destroyed more startups and starry-eyed entrepreneurs than you can count, but the One Great Thing that looks failure in the eye and says, “you’re not a roadblock, you’re the road, the one that will get me to where I’m going.”

For Musk, his One Great Thing is Mars. Everything he does, from cars to rockets to boring holes in the Earth, is entirely focused on reaching and then colonizing the Red Planet. The tech in a Tesla will one day get you to the Martian Whole Foods, as you drive along underground roads made possible by Boring Company engineering.

Musk is all Mars, all the time. He has achieved many “big things” on his journey, but they are nothing compared to the One Great Thing that pushes him to the outer limits of imagination and compels him to make it real.

So maybe it’s time you asked yourself: Do you want to do the next big thing, or One Great Thing?

All of us have this ability to be and do something great. It doesn’t need to be Mars, doesn’t even need to leave the atmosphere – it just needs to be yours.

I’m not talking about kids and family, that goes without saying. I’m not even talking about businesses or brands or that new technology thingy (though those are all legit.)

Will you tell them about that marketing plan you wrote, that tweet you sent or the Instagram story you posted? Will you talk about the money you made? Or will you just smile because no words will be necessary, because you did your One Great Thing and everyone knows it.

I admit, I’ve been around for a while – fine, a long while – and I feel like I’ve seen it all. Every new idea feels like just another old idea with a different logo. It gets harder and harder to believe that there are any dreamers left.

And then I watched a dude from California shoot a car into space.

I believe, I hope with all my being, that each of us will, at some point in our lives, create One Great Thing.

A work of art. A piece of magic. A story for the ages.

What will yours be?

This entry was posted in Uncategorized. Bookmark the permalink.